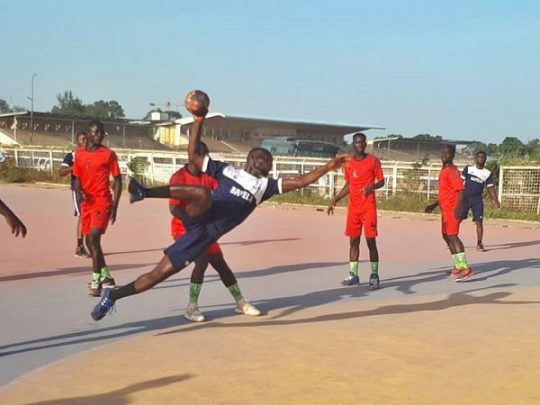 Handball National League:  Bayelsa United Gains Ticket To Semi Final
Zainab Tanimu
Kaduna, North-West, Nigeria
The encounter between Bayelsa United and Benue Buffalos in the ongoing Handball National Division One League in Kaduna, has paved way for the Bayelsa United team to qualify for the semi final of the championship.
The encounter which ended 27 – 27 points, gave Bayelsa United the upper hand.
In its previous matches, the Bayelsa United had beaten Ogun, Kano, Benue and lost to Delta.
While coming from behind with eleven points at the half time, the team sprang a surprise to edge out Benue Buffaloes at the second half of the encounter from qualifying into the semi-final.
Speaking to newsmen shortly after the match, the Coach of Bayelsa United, Opuene Robot, disclosed that the most difficult time for his team was the encounter with its Delta counterpart.
Although, Robot was optimistic of defeating Delta team in future encounter, just as he promised his team will gain promotion into the premiership.
He assured that their next game will record a lot of improvements as they are working towards how to bring in some professionals.
“To improve on our game, we need to work more on the wingers.” He added.

Gernot Rohr extends Contract With two and a half Years … Says, he has unfinished business with the Eagles squad.