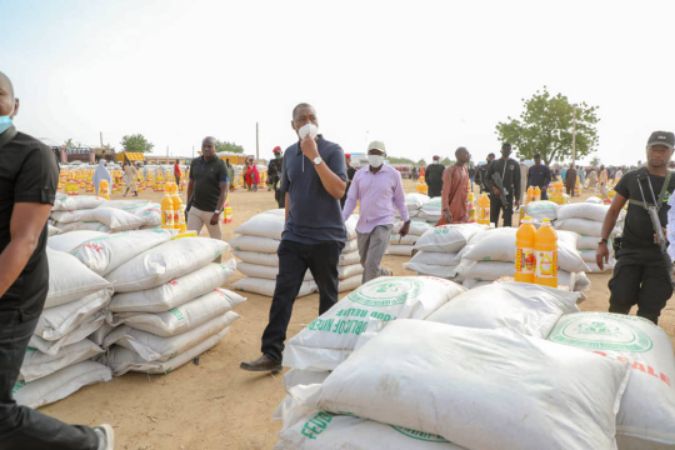 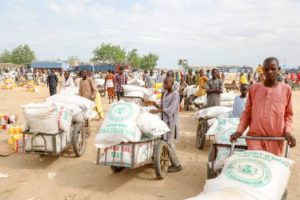 The Governor between Friday and Sunday traversed the three (3) local government areas, he supervised the distribution of relief items and coordinated return of IDPs back to their communities.
Thousands of bags of food grains and cooking oil were distributed, 38,000 of the beneficiaries were from Dikwa while the remaining 10,000 are from Mafa. 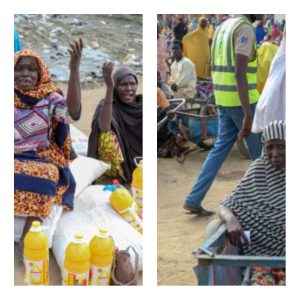 The relief items were jointly provided by Borno State Government and the federal Government through the ministry of humanitarian affairs.
In Dikwa where the Governor spent two nights, he visited various projects locations and assessed qualities of blocks meant for the reconstruction of destroyed communities around Dikwa and Marte local government areas. 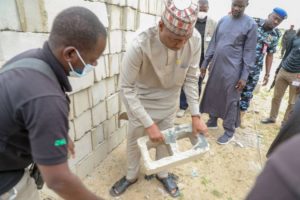 Zulum not satisfied with the quality of blocks he assessed, he warned the ministry of Reconstruction, Rehabilitation and Resettlement not to use substandard blocks in any of the state projects.
Zulum also inspected the construction work at CBDA 500 housing estate, he ordered for the speedy completion of the work to enable IDPs from Marte to return home.
The Governor during an interview with newsmen expressed his displeasure over the quality of work carried out, he warned the contractor handling the project to ensure all engineering protocols were observed. 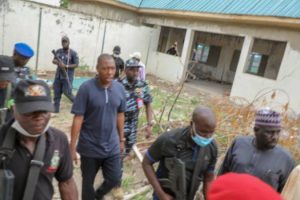 Similarly, Governor Babagana Umara Zulum made a case for the return of Garade community in Marte local government area, he had series of consultation with stakeholders to facilitate quick return.
The Governor expressed appreciation to the President and Commander in Chief of the Federal Republic of Nigeria, Muhammadu Buhari for his support and commitment towards the development of Borno State.
READ  NNDC Wishes Kaduna Journalists a Jolly Eid-el- Kabir Celebration …Donates Cow 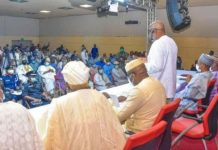 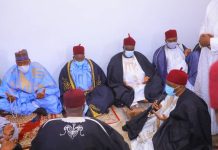 Shehu of Dikwa: Zulum, others hold funeral prayer in Maiduguri